Intro to Thunderstorms: Is there just one kind?

I would like to make a significant distinction between different types of thunderstorms. There is not just one single type. However, in order to simplify things for now, I will introduce two major forms of these storms: Air Mass Thunderstorms and Supercells.

So lets start with Airmass types. Airmass thunderstorms develop from an instability of the atmosphere that is typically caused by daytime heating. Yes, that's right, the SUN can cause these storms to fire up. They are very common in the southeast during the summer when the sun heats up the lower layers of the atmosphere, creating a buoyant environment where warm moist air near the surface wants to rise and the relatively cooler air above it wants to sink. As soon as the rising warm, moist air reaches the Lifting Condensation Level, marked by the level where the air becomes completely saturated, the cloud starts to form. The illustration below shows how a mature thunderstorm looks after it has developed.

This is a simplified picture but even the more "complicated" picture is just an extension of this simple model. Below is a model of the three typical stages of these air mass storms. The first stage on the left comprises mainly all upward motion, developing the cloud but not precipitating. The middle stage is indicative of the picture above, with upward and downward motions in the cloud. This would be a mature thunderstorm. The final stage is when the downdraft is the only remaining motion and the storm is "emptying" the precipitation within it.

These storms do not last more than an hour and are though of as "suicidal". What feeds the growth of these storms is the continual supply of warm moist air from low levels. As soon as the downdraft forms, and precipitation starts, cooler air starts to fill up the lower levels and the storm's main fuel is cut off and it ceases to continue.

One other thing that has to be considered is that many storms are not just single cellular as in the cases above. Some systems involve multicells that consist of a combination of the 3 stages mentioned above.

These are the major storms, that produce extreme hail and sometimes Tornadoes. They exist because of the same instability stated above, but also with the addition of something called wind shear, where wind at different levels of the atmosphere are at different speeds and move in different directions. The following image tries to show this feature 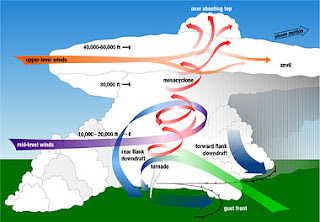 You can see elements of this system which are similar to that of air mass storms (gust front, downdrafts, updrafts, etc) but in supercells, the sheared environment is very conducive to forming vorticies and mesocyclones (easiest way to understand this is just consider smaller scale circulations) which are crucial for tornado formation (that can be for another blog post). The structure of these storms are quite impressive with extremely high cloud tops extending to the tropopause and often times overshooting the  troposphere boundary (depicted as the over shooting top) and long extensive anvils.

Supercells often form along a frontal boundary with considerable shear in the lower 300mb of the environment (1000 to 700mb layer) which is approximately 3km in height. Here are some photos of some of these storms in real life (these photos are not owned by me) 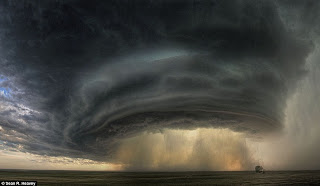 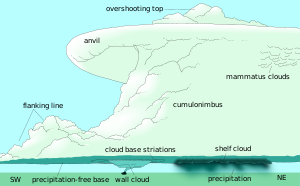 Out in front of the system, with the associated updraft, a downdraft will quickly form which is why the precipitation is focused towards the leading edge of the cloud base. Due to the shear mentioned before, any tornado that forms would likely occur "behind" the precipitation region, followed by an area of non-precipitating clouds called the flanking line, associated with another area of upward air motion.

These are some real basics on just two of the types of thunderstorm systems seen around the country (and world). I look forward to studying these more in graduate school and being apart of improving the forecasts of these storms.

Feel free to ask questions in the comment sections! I am by no means an expert in this topic but would welcome any questions you might have. I can always redirect you to someone or book who could help you more.

After what felt like 6 weekends straight of dry and wonderful weather, mother nature decided it was time to end that streak as rain crept into Western Washington Sunday afternoon. But the real jolt of moisture came in this morning as a rather strong cold front for this time of year is pushing through as I type. There have been reports of rain all across the region, as can be seen from the latest radar image from Camano Island.

What was even more remarkable about this system was just how humid it was this morning. Dew points across the region were well into the 50s, with temps not too far off (Dew point temperatures are a measure of the amount of moisture in the air). The higher the dew points, the muggier it feels but we do not get dew points very high around here due to our close proximity to the cool Pacific Ocean. Areas around the gulf coast know muggy, with dew points regularly in the 60s and 70s due to the warm and very moist Gulf of Mexico which often times can stream up into the middle parts of the country. Here is the latest surface observations from around the region, with dewpoints in blue at each station.

with a very moist environment from the surface up to 600mb, quite impressive with the large temperatures.

The latest time series from the University of Washington shows how the temperature and dewpoint have evolved over the last 72hrs, 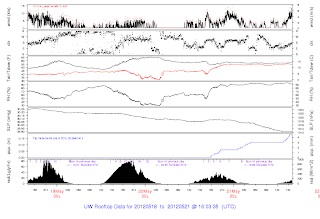 With a sudden jump to near saturated Sunday afternoon.

All in all, what does this mean? Well this will be a rather wet Monday but the rain doesn't stop there. Shower threat will continue Tuesday through Thursday, dwindling as the weekend approaches. For now, looks like the weekend will be dry.

Why are you visiting this blog?